This tactic was inspired by fast attacking and overloading the pitch. I've always been a huge manchester united fan so this was used on them. I haven't used it for a whole season as of yet but the results so far have been promising.

This tactic focuses on overloading the left and the right wings playing short fast high-tempo football and gegenpressing so the opposition struggles to contain it.

In friendlies at the beginning of the season up to the last friendly, we conceded only one goal and the reason for the last result against Milan was because most of the team was unavailable but we still managed to draw 3-3.

Please don't hesitate to test my tactic out and let me know what you think. I did not use any opposition instructions and no special individual training. omega luke inspired me into removing older playing and selling them off and replacing them with youngsters but apart from that, there have been no major changes to the team. 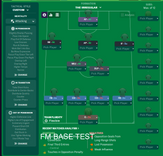