So I watch last year JJ (Jorge Jesus) success with Flamengo very carefully, and now although in real life his tactics are not working so well with Benfica team, I recreated his ideas from last year to FM21 and I tested it with both Flamengo and Benfica. Now you can see the more usual starting 11 on both teams, a standard Flamengo team where I only bought players for depht, and Benfica where I sold and bought a few players who could suit the tactical ideas of the Mister.

The ideas from JJ are very simple. Control possession, work hard, solid defence and a dynamic and paced attack. The back 4 are really solid, full back usually physically strong, tall center backs, the two midfielders are always two balanced midfielders who are solid defensively both also have the physicall and technicall attributes to distribute and create chances (for example Witsel), two creative and paced inverted wingers, a false 9 who is basically the number 10 who drop in the field to create a number advantage and also appears to score goals, and last bute not least a striker who is paced agressive who looks for the space created by the false 9 and explores the back of the opp defence.

For training I used RDF schedules, for signings i usually want attackers/wingers with 12/13 agression at least, 14 work rate and teamwork at least at as most positions as possible (except the GK) I have achieved the perfect recreation not just the Mister's ideas but also the players output on the field, with great results and great numbers. I'm a big JJ fan and I hope you enjoyed this recreation, thank you for all your support and enjoy the game! 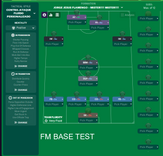