I am not a tactical guru, I acquire inspiration from those that are. First of all, a massive thank you to all youtube streamers, for without them I would not have known of some of the interesting tactics out there. Special shout out to; Tookajobs, RDF, Bustthenet, FMstinger, Zealand, Mainomai, Hoodgaming, FmBase, and Clayts to name a few. I try to borrow various info from a bunch of sources hopefully to see if it works in my own saves. Tactically I would like to acknowledge Magician for his Phoenix tactic, Knap for his many player instructions and throw-in, FMstinger, and Bust the net on ideas about breaking from a defensive set-piece.

The Formation I chose was a 4231, I decided to take control of 8 teams from different leagues to see if it would work for all of them, I got mixed results, I realized that it would probably work much better for teams who are predisposed to play a 4231 system at the beginning if you don't use transfer market. I simulated one full season and no transfers.

Thank you for your time. 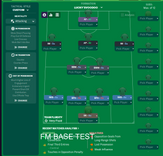