Fluid, attacking,short passing, very quick vertical tiki-taka with a lot of creative freedom. Also strikeless like LidaVo5 but more passing and plays out of defence. Probably needs a bit better team (that LidaVol5) to work really well. Also again, need rotation because intensity and a lot of hard tackling.

I did a holiday save to Premier league again. Just plug and holiday to 31.may. No editor, no nothing. No shouts or team talks or anything even from assman who just chose team everytime.. Two teams, Liverpool and Fulham.. All pics below (as other tests). Liverpool won triple and Fulham to Europe as well.. All just with plug-and-play..

All these FM-Base and league holidays test i have saved and stored just in case somebody is interested. I think these two are enough for strikeless tactics, have to do something else when i get this Sunderland save done. There is also two other dogs here in a house who deserve some tactic to named by them.. :D 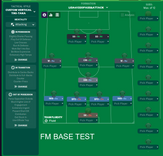