Fluid, attacking, quick, short passing, vertical tiki-taka with no ”get stuck-in”. Again strikeless like LidaVo5 but a bit less tempo and a bit less intensity and no ”get stuck-in”. For those who sometimes go holidays or use instant-result, this one has less red cards or exhaustion than LidaVol5. Also probably for teams that not so great passing or smaller squad because less intensity, less tackling and more likely less injuries.

I did a holiday save to Premier league again. Just plug and holiday to 31.may. Again same, no editor, no nothing. No shouts or team talks or anything even from assman who just chose team everytime.. Two teams, Liverpool and Fulham.. All pics below (as other tests). Really great results! Liverpool won everything and Fulham 6th and to Europe as well! All just with plug-and-play..

I was really pleased with these tweaks and it actually did better than what i tought compered original one, almost as good. Getting finally finishd with my Sunderland save pretty soon, and next save/club will have some different formation to start working with.

All these FM-Base and league holidays test i have saved and stored just in case somebody is interested. 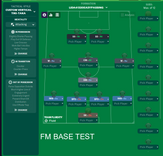