This was originally the holy ghost fire tactic by knap so all credit goes to him but over the course of a few seasons and the players coming in I slowly changed a few of the positions and roles to suit and after doing one of my videos someone shown interest in the tactic itself so here it is.

Not sure how it will do for other players and teams as this was made for the team i have.

My only advice is the front three can all play in each others positions and all three have good passing, vision, dribbling, and finishing. similar to having 3 Joao Felix players. 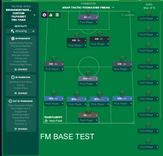