This tactic is inspired by Jesse March's RB Salzburg/New York, and the principles of playing within the Red Bull system.

March, like many of the disciples of Ralf Rangnick and Helmut Groß encourages his team to play with energy, discipline, aggression and speed. Typically set up in a 4-4-2/4-2-2-2 shape. March's Salzburg are known for their high press, and direct style of play which I have recreated in this tactic. My interpretation sits in a 4-4-2 shape for a bit more defensive solidity, but the IW have instructions to sit narrower, close down more to represent the classic 4-2-2-2 style when pressing, in transition, and in attack.

One feature of March's sides particularly that I really wanted to include was his idea of the "stinger cross." To create this, I have employed whipped crosses and all wide players to aim at near post. This cross is extremely dangerous as both the keeper and CB's have to commit to stopping it and it lives players open and space in the box, and if they don't it's a very simple, efficient goal to score. 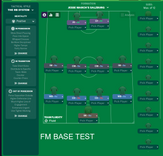