So I have decided to cave in to peer pressure and play Tiki-Taka as it seems the way forwards right now. However I am breaking the current mould and playing traditional WB's :eek:

I created this tactic for my York save, we were in our 2nd season in the Championship pushing for play off promotion but were struggling to score goals whilst conceding few as well so I thought it was time to switch things up. I had a bit more freedom with the tactic as I had managed to get hold of a couple of players who could actually kick a ball! So the natural progression in my eyes was to go from 1 ST to 2, makes sense right? Originally I did try this with 2 CMs but felt my CBs were being left too exposed and so pulled one back to play a more defensive role. The transition to a new tactic mid season was rocky but we managed to gain promotion to the Premier League through the play offs with a side that was definitely not strong enough to do so.

I can post some of the results if requested but will be focussing on the tactic after it was more familiar to the team playing in the Prem. In this inaugural Premier League season we managed to finish 8th in the league, we mostly struggled against the big 6 and fared well against every other team across the season. Now 8th may not sound like a special season however we were heavily tipped to prop up the table at 3000-1 odds pre-season. After the season finished I went back to look at how the review had changed and I was still predicted 19th with 1000-1 (and at one point in the season we were in European contention spots).

I have uploaded a picture of the tactic and the strongest line-up rating wise I could. When checking this out please be aware that 3 1/2 stars for my team is considered a Decent Premier League player, 3 stars is a Leading Championship Player and 2 1/2 stars is a Good Championship Player. That in mind you can see we have 4 players of Premier League standard, 2 of these were brought in during the Jan window and the GK at the start of the season was considered Leading Championship before training and performing well in the league.

As you will be able to see from the end of season stats;

Defensively we conceded a lot of shots, however we do not concede many goals and are around average for xG against, in fact you can see that our conceded goals and xG conceded per game are pretty similar. This highlights that although we gave away lots of shooting opportunities, we don't give away way GOOD shooting opportunities. Considering the level of my defence is Championship standard I would imagine these number would be better with an established Premier League side.

Offensively it is clear we have scored well above our xG and the number of shots we take is fairly low. I mainly put this down to SI's version of xG and the quality of chances we actually make. SI's version of xG can be a little iffy in my opinion, I have seen clear one on one chances where my player has rounded the keeper appear as a 0.4 on xG, I'll be honest if my player missed an open net from 8 yards I would be very upset, so less than 50% chance this goes in is utter nonsense. These tend to be the sort of chances we attempt to create. The very large percentage of shots taken in this tactic are inside the box and generally with space to shoot.

Our tackles won are well above average showing our defensive solidity, passing percentage above average as expected with a Tiki-Taka style and shot on target percentage being above average backs up the fact that we tend to create good quality chances in the right areas.

The general stats of the squad show the goals mostly shared between the STs Moore and Mazinho, most attributed to the AF role. The next highest scorers were the IFs (Lefebvre generally played out wide as well) and a few goals from midfield. We did not score many from set pieces which is expected as we are not a strong team and do not have a focus on aerial prowess however the set piece routine is adequate.

The assists mostly came from the AP role however the link up play between strikers was also important. Having ST's who can pass with good vision is a big benefit in this tactic.

In terms of mistakes leading to goals we expect to have some as the underdogs but the fact that it was spread out and not attributed mostly to a specific role shows there are no glaring weaknesses in the way we play, merely that the opposition managed to craft some good chances.

I have also uploaded the stats for some of our best performances. 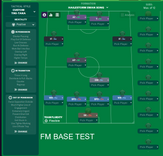