This is a tactic that I have created and tweaked for a while, in my first season with Derby I won the FA Cup (beating Liverpool in the Semi Final) and won the Championship.

I am 7 games into the second season and after already beating Chelsea, Tottenham and Man City I am interested in how it does in the testing league.

It is a high pressing tactic that sees great football through the centre but also with width either side and an outball to a pacey striker if needed.

Look forward to seeing how it does, and also for any feedback. 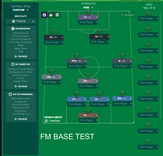