Wanted to make a tactic as aggressive as reasonably possible, and ended up with this.

Results in a massive amount of goals, almost always for you, sometimes for your opponents, sometimes both!

Your 3 D(C) players need to be athletic, certainly with decent pace, preferably good in the air to deal with long balls and clearances, and to be a threat for corners. I've found it works best to either have the DC on Cover and the other two on Defend, or the DC on Stopper and at least one of the others on Cover instead.

Both the DCL and DCR need instructions to 'Stay Wider' when in possession, as do the MCL and MCR, to make sure your build up play isn't too cramped and crowded out in the centre.

Various combos work for the M(C) players, I just usually have one more defensive and one more supportive.

On the wings it's preferable to have creative roles, AP, IW, or W, as having the more goalscoring roles can make the final 3rd too cramped and without enough creativity.

I prefer the AMC as an AM (Su), but again most roles seem to work in one way or another here.

For strikers 2 Advanced Forwards works fine, but a False Nine can work well too, especially if the winger near them is more of an attacker.

Having as good a keeper as you can is essential, because at times they will be VERY busy.

For the most part you will keep lone opposition forwards quiet, most goals scored against you will be from wingers instead, and strike partnerships can sometimes cause a lot of problems.

However, you might not care if your attackers do their job! With so many forward it is common to overload the opposition on counter attacks, and a lot of options means defences cannot cope with the numbers when you try to break them down.

I'm a United fan and FM player, so I have no idea if this will work or fail dramatically with lower level teams.

Started playing with this halfway through my second season. Third season won the Quadruple, Fourth season won the Sextuple (including Community Shield and Euro Super Cup). This tactic also helped me with the World Cup and Euros with England.

This tactic completely cuts out full-backs, so if you aren't sure about it, I recommend picking teams with versatile full backs who can play elsewhere on the pitch.

For EVERY GAME the players will be 'Concerned' that the 'Form could expose us at the back' not matter how many big wins you get, so don't worry about that.

Anyway, hope you enjoy this tactic if you use it, whether it works or not it should be entertaining at least! 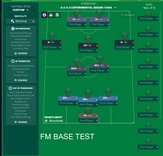