The first question you most likely have today is why Einaudi? The tactic is named after Italian pianist and composer Ludovico Einaudi.

Simply because it has been designed to play football in the same way Einaudi plays the piano – beautifully.

Prior to going down the Football Manager tactic wormhole, I had an idea of how I wanted to play football within the current version of Football Manager. Unfortunately, it was exceedingly difficult to put those ideas into practice. Therefore, I felt I was missing something or perhaps even overcomplicating the process to get to where I wanted to be. This tactic will synchronise perfectly with my Die Maschine philosophy which I released on my blog last week, and is well worth reading.

Where the Einaudi Tactic began...

Yesterday however I sat down at my computer and whilst currently struggling through Covid-19, I have had a fair amount of time to play FM21 of late.

This time I wanted to understand why the most successful tactics currently that have been released work, and how they compared against each other.

It took around six hours in total and some Microsoft Excel skills, but I managed to make quite the breakthrough noticing patterns between the data set I had decided upon using.

The tactics I used for the basis of this research/experiment were 14 of the best performing tactics currently out there now. I got these from FMArena and FMScout and I will now proceed to list them and the author of each.

First and foremost a big thank you to all the tacticians listed above and their works which inspired me to look further into how they have done things, and what I could learn from what these guys have already put into practice.

I will now list the common factors between all the tactics I examined and how we can use them to build a tactic. Which will utilise all the strong points from the information gathered and leave out areas which have not been used to success.

Now we have looked at some of the positive common factors between the examined tactics. My next port of call was to look at areas that each tactician had opted to leave out. Given the success of these tactics already there must be a reason why they are not working in the current match engine?

Based on the information I have gathered so far it became apparent to me where I had been going wrong. What I needed to implement in order to create a successful tactic of my own, to match my Die Maschine philosophy.

Before I started to put this into practice, I needed to investigate further into what formations these tactics were using. What roles within those formations and individual instructions which had been added on to each position.

In the end, I decided on the below formation, and I will explain the reasons why. 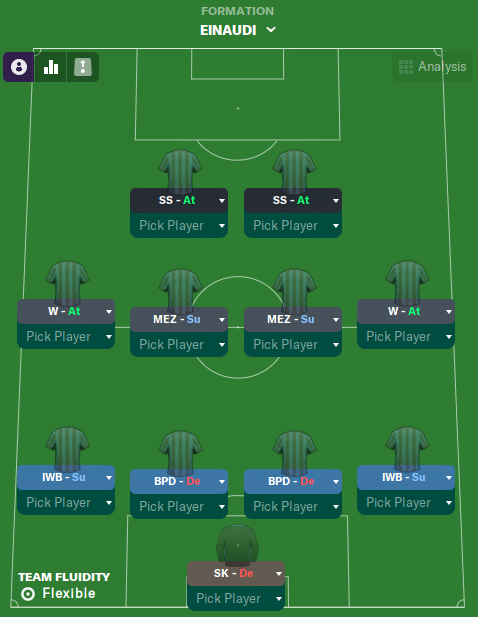 SK (Defend) – This position is used within 10 of the 14 tactics I tested, and the individual instruction of Take Fewer Risks was added on 6 times out of 10.

IWB (Support) – This position is used in 9 of the 14 tactics I tested, and the following individual instructions were added Take More Risks (6 times), Shoot Less Often (9 Times), Tackle Harder (6 times), Dribble More (6 times) and these have been added on to mine.

BPD (Defend) – This position is used in 11 of the 14 tactics and generally no individual instruction was added. However, I decided on adding Stay Wider (used in 5 tactics) for personal preference.

W (Attack) – This position is used in 7 of the 14 tactics and with the following individual instruction added Shoot Less Often (5 times), Tackle Harder (5 times). I also decided on getting both wingers to man-mark the opposition Full-Backs.

MEZ (Support) – This position was not used in many of the tactics, but I loved how they played during the Quicksta tactic trial and figured I could work them into my tactical framework in a similar way. I got each of them to man-mark the opposition defensive midfielders. Both to Take Fewer Risks and to Tackle Harder and Mark Tighter.

SS (Attack) – This position is used in 7 out of the 14 tactics I examined, and I have added the following individual instruction to them Shoot Less Often (6 times), Tackle Harder (7 times), Mark Tighter (5 times).

Once I had gathered all the intel I needed. I tested the tactic with both Liverpool and Atalanta (predicted to finish 8th) and won league titles with both on holiday mode.

I strongly believe the performance of this tactic can be further improved upon by playing it as yourself. By implementing the rules of the Die Maschine philosophy when looking toward player recruitment. The demands of this tactic will perfectly synchronise with the philosophy and the two together should be a match made in heaven.

Thank you for reading and I hope you have great fun with the tactic. 👍 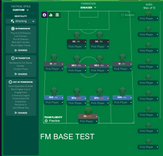