2 years ago i created a tactic of the same name which broke the engine for a while with some ridiculous scorelines so I thought id try to re-incarnate the tactic again as 3 at the back seems to be going well so far in this new fm version.

Cards on the table, I have only used it for 10 games so far (with Dundee Utd) but have won all of them and smashed opponents in the process including much stronger teams away from home in Europe (2nd season) and seeing how much it has ripped these teams I am pretty excited about it again, especially given my teams not even familiar with it yet.

I am not one for massive posts, i do not use in game instructions, fancy training schedules etc. I pretty much just use a tactic and let it run.

Anyway, attached if anyone else would like to try it :-) 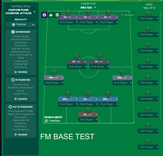