My version of the counter-pressing attacking style of Jurgen Klopp football.

This formation should help your side overwhelm your opponent and create more chances than they do. This does not always happen but what is for certain it is unlikely that you will not score in a match unless all your forward players are having bad games. The idea of having inside forwards is to allow the full backs to overlap and cross if needed or your wingers will cut in and shoot or look to pass to the striker or attacking midfielder with some quick passes.

For set pieces I would advise it be you wingers or full backs where possible. I have added my routine file to the attach section hopefully that makes it for people to use. I also suggest having left footers take right corners and right take left. You will note that I utilise the long throw as well, this has actually proven useful to nick a goal every now and them so if you have anyone with long throws of 14+ you should be ok. When defending set pieces the wingers and strikers are left up to counter attack.

Manager instructions, whilst attacking is the main state for this formation it is worth noting that you will need to be prepared to game manage. Don't be afraid of using very attacking, even against the better sides. Positive usually doesn't do much so go to balanced if you are worried about being caught out too much by your opponents. Unlike some formations scoring is still a real possibility when on defensive as the counter attacking potential of the formation is high.

Player instructions, I would not change them from what they are. The jist of them is that you striker looks to lead the line and get into space to get a shot off, the wingers will look to drive at the goal or to the byline and then close in on goal. The attacking midfield is on support to look for killer passes to any of the front three in hop of getting them into a scoring position. The centre midfielders are BWM instead of the box to box as I feel that help balance out attack and defense better. They dont over commit going forward but still help out when you have you opponents camped on their 18. On defence they bust a gut to get the ball back quickly and look to put you the front foot.

Opposition instructions, it is advised to close down wingers and strikers as playing a higher defensive line can leave you vulnerable. Naturally show everyone onto the weaker foot.

Recommended players, Salah. An absolute must! The man cant stop scoring. However even more impressive is Romelu Lukaku. He can't stop scoring! He fits the pressing forward position perfectly. It is worth looking for a keeper that is already comfortable playing as a sweeper.

It helps if your wingers are of the opposite foot to the side of the field they are on as they will be cutting inside frequently. Noone else particularly matters.

High vision, passing, pace, acceleration, dribbling and finishing after a must for the front three and the attacking midfielder. Pace, tackling, passing and determination for your BWM. Pace and crossing for the full backs. Now the keeper is player as a sweeper so good passing, first touch and anticipation are needed. Obviously with the match intensity being very high players will need high levels of natural fitness and stamina. If you can couple this with work rate and determination then you have a great player for this formation.

With this being said player rotation is going to be a must. Therefore it is important to build a squad that can cover multiple positions very well. Players like James Milner who player pretty much everywhere are the lynch pins of this formation. Yes get your 4+ star players to be your first teamers but you will need plenty of 3 star players who can a variety of positions if you are to stave off fatigue and a potential injury crises.

It also helps to invest in fitness coaches, physios and sports scientists that that top of their field to help manage and maintain your players.

The top scoring position will most likely be a winger but if your forward is good enough they will be right up there. 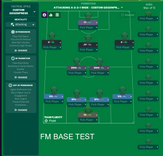