<size 5="5">Back in Football Manager 2014 & 2015, I had a tactic called "The Trooper" posted on here that was named after the famous Iron Maiden song. It focused on being both competent in the art of ball possession alongside also being set up to utilise counter-attacks. It also brought me plenty of success. The shape used to be more of a 4-2-3-1 with two defensive midfielders.

As Football Manager 2021 is now upon us, I present "Aces High". A newer rendition that aims to play in a similar way. It has now evolved in to more of a traditional FM-favourite 4-3-3/4-1-4-1 type shape and utilises the new Inverted Full Back role to provide extra defensive stability. The use of the Inverted Full Backs mean we can throw more players forward to cause havoc for opposition defences, whilst still maintaining some defensive stability.

You will score lots of different types of goals. Some which will be intricate passes/one-twos and some which will be blistering counter-attacks - hence the name Aces High in reference to the Iron Maiden song about being a Spitfire pilot in the Battle of Britain.

The most satisfying thing about the tactic however is that all five front players contribute to both goals and assists. A real team effort.

<size 5="5">If finishing 3rd with Aston Villa isn't enough to tickle your fancy, it also did a good job with a top team like Manchester United. Antony Martial led the line as the main striker throughout the season and was unfortunate not to hit the 40 goal mark. Bruno Fernandes managed 16 goals, 26 assists and Marcus Rashford scored 21 goals alongside 20 assists.

It's worth baring in mind that with both these saves, I didn't pay much attention. I just chose the team and let the games play out in the background whilst I did something else. With better squad management, the Villa result may have been improved on and United may have had better luck in the FA Cup & Carabao Cup. The double with United is still impressive though.

I wasn't sure how the tactic would fair with an under-dog team, however on my personal Journeyman save, I got promotion with Newport County from League One in to the Championship by winning the league in my first season. I then left them mid-table in the Championship to join Blackburn Rovers.

I am now using a modified version at Blackburn Rovers where the only difference is that I've changed the width to "Wider" and I have increased our tempo to "Extremely High Tempo". The goalkeeper now also distributes to center backs. I've also added some set piece suggestions based on Zealand's latest YouTube video. I've always set my tactics up to use inverted takers towards the near post, however it seems that this season the "Lurk Near Post" player is more important than previous years. I'm currently sat 3rd in the Championship at Christmas, despite bad injuries (Media Prediction is 12th) and am seeing a similar spread of goals.

My advice is to ignore the fact the inverted wing back role and still keep a right footer on the right and a left footer on the left. Their job is to protect the high line/center backs and provide passing options. Your width is supposed to come from the wingers as this stretches the opposition defence and makes room for your striker and two attacking midfielders to exploit the half spaces within. This is why when a wide man gets the ball, you have about 5 different bodies in the box to get on the end of a cross. It is also why I prefer a right footed winger on the right and a left footed winger on the left. I know it sounds counter-intuitive but it helps ensure they can cross more whilst their opposite counter-part on the other side of the pitch gets on the back post to tap crosses in versus trying to cut inside.

Due to the high line, favour center backs who are good aerially to deal with counter-attacking long balls but also who are quite pacey themselves. For the full backs, you may want to consider re-training playmakers with decent physicals in the position because they sometimes play through balls forward and help you retain possession so if they are strong technically, they become an important asset to the team.

Prioritise pace and dribbling for the wide players. They will get in goal scoring positions so the better they are technically, the more they will likely convert shots or assists. Your attacking midfielders are your most technical players. You want players who play killer balls here and can spot a pass. Grealish or Fernandes are great examples of players who have both technical ability but also provide penetration with their physical ability.

Your striker will score most of your goals, but you can actually get away with someone relatively average in this position. The team is set up to play lots of through balls to the striker and/or crosses, so the better they are, the more they'll score and the better their off the ball movement will be to create space for the others.

Don't bother with OI's. I let my assistant do team training. 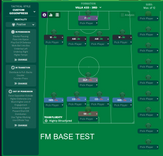