I wanted to create a 442 tactic similar to one I've been using for a few years now across various versions of Football Manager. This is the first time I've posted any tactic I've created but wanted to see how it would perform when tested by others. The idea behind the tactic is simple, I wanted to create attacking variation from both sides of the pitch as I'm not a fan of symmetry when creating a tactic. I decided to use Wide Midfielders (WM) as blank canvases to do this, I wanted to use the WM's rather than a WInger/Inverted Winger as they provide the same attacking mentality but from a deeper starting position.

My midfield duo is where I always start as they can often be what exposes my tactic when things get tough. For that purpose I normally go with a defend/support duty combo (CM Def is normally a favourite), this time though I wanted to try two support duties and use my fullback's to help with defending. So in the end I went with a tried and tested partnership of BBM and DLP, with the only PI being Shoot Less Often on the BBM.

Full backs were my next decision, on the left I have went with a FB Support with the PI's (Shoot Less Often and Sit Narrower). He will support the BBM by being closer to help with passing options and defensive cover, though the BBM will also help with both defence and attack as needed. On the right with the DLP holding position I've been a bit more adventurous in choosing a WB Support, only PI is Shoot Less Often.

Now for the WM's, I wanted to create a position that would function similar to a Wide Playmaker with runs inside. So as not to occupy the same positions as the BBM and better utilise the full backs it made sense to use this on the right side. The DLP will hold position and allow the WM to roam and drive into the space ahead, the WB will then have the vacated space to push forward into on the wings with additional support inside. On the other side I turned the WM into a more conventional winger who will occupy the wide areas with more cautious support from the FB behind and the BBM inside.

Up front I would normally go with a trusted DLF and Adv Forward combo but I'm not liking how little my DLF's are getting involved in the action at the moment. I decided on a Trequartista as they will find space by roaming, linking the play and getting their share of goals.

No opposition instructions or specific training.

Test results come from holidaying a single season with both Fulham and Liverpool, no set piece takers selected. All decisions made by the Assistant Manager. 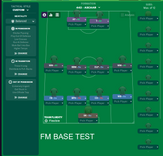