This tactic uses wingbacks as a huge part of play. This tactic was used with Hertha Berlin Beta, racking up 24 wins, 4 draws, and 6 loses finishing first in the league and winning the DFB-Pokal.

The aim in possession of the ball is to start with the ball in the defense and creating short passes to open space. To allow more space, your wingbacks will be flying up the pitch (Support Roles) to put in crosses. The WBs will be a huge part in success as their numbers for key passes and dribbles per 90. It is greatly beneficial for their dribbling, crossing, pace, and stamina to be decent. As listed below with a screenshot, Zeefuik had great numbers with 11,12,15,15 in these respective areas. Note the defensive lines are much higher with an offside trap. This is purely based on your team and what time of goals they concede. If they are conceding with through balls from deep play, move your line back some. I've also did not click anything for tackling to allow for less cards throughout the campaign. Set this as you wish and prefer.

Having A Sweeper Keeper on Attack will help start counter attacks once the ball is won. Per the tactic, it is preferred they distribute to the defense, however at times, he will kick it long depending on how long the line is, proving decisions are better in FM21. Each of my keepers have an assist for this very reason: kicking it long once in a while when the ball is in his hands, over the defense, for your AF to run onto for a 1v1 situation.

The defensive midfielder has some sway in his role. I've used both a DM (defend) and a DLP (defend), depending on what the player is best at. The two midfielder roles are to help support the attack and defense, while also being more creative outlets. They don't get as many assists as the Wing backs, but they help move space to allow the option to be there and bring players inside for more space to open up outside.

The AMR and AML are very important in creating and scoring goals. Having the a ability to dribble is important for the "Run at Defense" part of the tactic. Their expected goals, assists, key passes, and dribbles for per 90 were all above average in the Bundesliga.

Your Striker, being an AF, is important for scoring the goals but providing at other times as well. A high amount of goals, expected goals, conversion rate, and shots on target ratio per 90 helps him a lot. A classic AF with good dribbling, finishing, and first touch will execute this well.

I've had a lot of success when it comes to an attacking mentality, but change it from game to game situations and within the game say if you're up 1-0, along with some player roles. 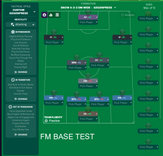