First of all, apologies for the images being in Portuguese, the layout is the same so i dont think there will be any trouble. I also added the tactic file so you can get it. This is a tactic very well suited for fast paced and technical players because of its direct passing and its fast tempo. On ball- When your players have the ball, they will constantly try to make a pass into the space behind the defensive line, the focus in the wide areas of the pitch force the full-backs to be involved in the construction of your game. The defensive playmaker will work as a distributor, finding the space in the flanks and placing the ball there. The mezzala the only role that i could find that would penetrate the defensive lines when the opponent left me with no space for my team to work with. The Advanced playmaker will try to place the ball in the flanks for your fullbacks to cross into the box or when the opportunity is there he will try a pass into the box for the strikers or any of the interior forwards, he will also set up shots from distance for the mezzala to take and even himself. Off ball- The positioning of the players and the high pressure will often force the opposition to play it long and it really helps if you have physical midfield to win the aerial duels (you can also set you defensive line a bit lower, this setting really depends on the opposition) The high pressure makes it hard for lower level teams to build up their game and often they will try to get space behind your defensive line so i recommend adjusting your center backs to that scenario as it is in the tactic. This tactic was tested with Porto and won 2 champions leagues in 5 years, it may require some changes against higher level opponents but if you have a top tier team it should work with almost no changes needed. 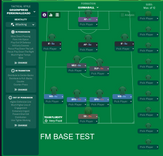