High intensity football with focus on attack and deathly on counter-attack. It proved to be very solid in defense. Attachment tactic_2.png

I used my SK on attack role, because it provides nice counter events, but feel free to adjust your keeper if he cannot play well at that role.

It helps a lot if players, specially defenders have good Anticipation attribute. Heading and Jumping Reach are very important for aerial balls, so if you can get that kind of fast, tall and strong defenders, go for them.

For DM you can also train some CM players, if they have very good passing and tacking.

The CM (Box-to-Box) could be played by more attacking midfielders, but you,ll get stronger defense if he also have nice tackling, marking, work-rate attributes.

If you got fast Wingers with very nice pace, accel, passing, crossing and dribling, you got the right players for this tactic. Same foot or inverted feet, works well, it depends on players you have,

About strikers, it could help to have a strong tall man and another super fast strike to create nice interactions and win aerial duels.

This tactic had a special attention to all set pieces, even the defensive ones, wich proved to be important to reduce goals suffered from corners, and provide some interesting and amazing counter attack events provided by the wingers. The attacking corners and throw-ins routines are from Knap. All other routines we're settled for this tactic.

Fully managed save during 2 seasons @ FC Porto with overachieving results against strong teams.

First season, no OIS. No transfers at 1st season an reached CL final.

At second season, my Assistants Managers took care of OIS. Seems it worked even better.

An undefeated run at CL groups, but got 2 losses against Arsenal. Only 3 losses during the full season. Results from B team, Sub-23 and Sub-19 proved also the tactic efficiency.

After test if tactic proved useful I can detail more stuff or results about this tactic. Feel free to test and share results. 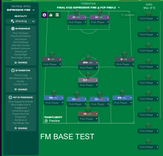