An experiment to find the balance between throwing an extra man forward whilst not becoming too vulnerable at the back.

I felt like mixing my tactics up as I felt as though I was relying on the same formations year after year (4-4-2/4-3-1-2, etc) and I wanted to try something that would possibly allow me to hold possession in the final third however I am far from competent with tactics so I imagine there is a lot that I'm missing. I posted the same formation on the Football Manager Reddit back in FM19 and got advice that mostly wouldn't have allowed me to play this shape so this would be the next best thing.

By all means, if this is practically impossible to make somewhat doable then it'll probably be thrown out the window but I want to give it one last go before I give up on it. Any and all feedback would be appreciated as I try to master, or at least understand on a basic level, this formation. 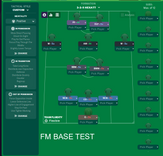