For some reason, in multiple versions of the game, LW has always been a problem position for me, I just cant seem to get them to perform satisfactorily. Deciding to get rid of them all together, I threw together this abomination and so far, after 2 seasons of using this formation with Southampton, It is performing brilliantly for me. I don't claim to be a tactical genius, far from it, but it just seems the work, the WB on the left hand side combined with the AP roaming out wider when he has the ball seems to create enough influence on the left during attacks if the ball moves out to that side of the pitch, though most of the play is focused down the right flank.

It is a bit leaky at the back, which I am trying to work on solving, though it may just be down to the fact that I do not yet have world class players in defence 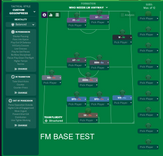