Thought id try out my very successful tactic from FM20 and its worked a treat!!

the most popular set up of 4-2-3-1 has become so successful for me its very hard to change from it but i know it doesn't work for every team so im sure this will be limited to a certain calibre.

anyways, some stats from what it produced in my 1st season - Man Utd

Theres goals and assists that come from everyone in the squad. i invested in Grealish & Soyuncu in January

like any tactic it takes time to gel hence the big 3-0 losses to Inter & Real madrid in my 1st few games but after that i went on a very long unbeaten run until a rare abysmal show of defending away at Chelsea in the Champions league 2nd leg of QF ending in 5-1(92nd min winner for them to knock me out of the comp) finishing 5-4 on agg.

Im very excited for the transfer window and hoping to deliver the Champions League in my 2nd season!!! 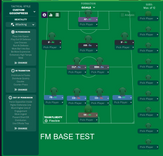