This tactic was designed by me after I was getting fed up with being caught on the counter whilst using a very basic 433 DM Wide Gegenpress.

The front three is a very standard AF who should have easy work against the defence, with two IW on attack in support from the AML/R. The back four is also fairly standard with two WB's on support who move up the wings in support of the in-cutting wingers, whilst still being reliable in defence. The CB's are mostly up to you, I currently use a BPD and a NCB, due to the quality of players available at my level and budget. But I recommend having at least one BPD if you have the players who can. The biggest shake up is in the midfield. A lone BBM in the centre moves up and down the pitch in support of all phases of play, ideally you want the most athletic midfielder here. Sat behind him is a Regista and a BWM. The BWM has the simple job of clatter the other team and then ditch the ball off to a more skilled player. The key to this tactic is the RGA, who supports the offense high up the field like an aggressive DLP, but with him being a DM instead of a CM, he offers much more support going back as well. He doesn't have to be the best defender, especially in lower levels, but an extra body in defence never hurts. Like the BBM he needs to be a highly athletic player, but much more skilled on the ball.

The Set Piece tactics used with this are my own experimental work in progress, they aren't that good, so feel free to use your own or improve on mine.

I used this with most success in my current FM21 Hearts save, guiding them to an undefeated season in the Championship, winning the League Cup in the process, and currently has me sat 2nd, half way through my first season in the SPL (with transfers made to the team).

It has the name it does because I couldn't think of anything decent! 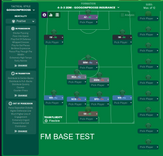