Introduction: Currently starting my second season with Dundee FC, after winning promotion in the Scottish Championship in the first season. After transfers we were predicted to finish in a Play-Off position in the Championship, but we won the League rather easily and made it to the final of the Betfred Cup, defeating Rangers FC and Celtic in the process. While I used a flat 4-3-3 in the Championship, I wanted to solidify my defensive line in the Scottish Premiership so I decided to implement a Ballwinning DM. In the second season that I just recently started I'm top of the table without losing points whilst my predicted finish is 11th place (of 12 teams).

Why and How? My squad doesn't have very gifted defenders, mostly lacking quality centrebacks. Because I'm Dutch, I only know how to play the footballgame in an offensive-minded 4-3-3 formation, so I had to figure out how to ensure a solid defensive line whilst staying close to what I'm familiar with. I'm no FM guru, so I am not completely sure why it has worked so well for me. But my analysis is the following:

At the level my squad plays, my attackers need space. They don't have the capabilities to play through a compact defence with slow build-up play. To fix this problem, I want to recover the ball halfway my own half, so my attackers have the time and space to be productive. This also plays into my defensive problems. Playing compact also helps with my defensive problems. My centre backs usually only have early crosses and loose throughballs to deal with, the most ballwinning has been done by my midfielders, wing-backs and wingers.

The glue in an offensive sense are my playmakers in midfield. Especially the DLP, the only player with a slightly altered individual tactic, is of massive importance. His job, is speeding up the play and providing my attacking players of a very direct pass into the space we have created by winning the ball back late. I'm lucky as my best player in the squad is natural in this role. Aside from my DLP, my players are pretty bad. Because of this I try to keep the instructions as simple as possible. This is how I have set it up:

I'm very interested to see how good this tactic actually is, but even more so learning why it has been working for me so well!

Positive 4-3-3 DM without neglecting the own defensive line 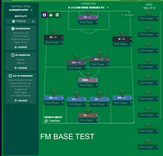