As the title suggests, I tried to recreate Pioli's Milan tactics. I've been tweaking the roles and this one seems to be the most accurate. The only one I'm still unsure about is BBM, Kessié is more of a BWM(S) in real life but also gets forward into the box occasionally ; as well as the fact the tactic performs worse if he's BWM rather than BBM.

Both of the losses came from me trying to tweak the tactic to be too attacking near the end of the game and I subsequently lost both games in the final minutes so I stopped doing that. Besides those two blunders it's solid defensively, but as it's a high line pacey CB's definitely helps. As you can see, even with few games played, there are many different goalscorers, reminiscent of Milan IRL.

Ibra on DLF really negates his lack of pace, but for this to work with another team/CF you definitely need a good playmaker in his position, passing, vision and teamwork really important. As his replacement I'm currently looking at fellow Swede Alexander Isak, has the potential to be a perfect replacement. 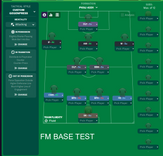