The key of 460 no front tactics lies in speed, including transmission speed, moving speed, and local switching speed. Carroll's weak points are just reflected in these aspects. Therefore, I think C9 and 460 are incompatible, and the only result is that both speed and strength can not be found. So, isn't Carol useless? Not necessarily. Boris arkadiev said of how to get rid of his opponent's marking:

More determined dislocation movement, more resolute switching space, the need for sustained speed, and once lost control of the ball, in order to avoid the uneven layout of the other side by the other side of the counter use of the necessary local anti grab, these will bring great physical consumption. Moreover, if the other side does not carry out high-level oppression like Bolton, but adopts a deeper defense baseline, and at the same time narrows the distance between the guard and the vanguard, we will lose the wide available space behind the enemy in the tactical brewing area 10 meters before and after the middle circle. We will have to go into positional warfare. Therefore, it is necessary to have a set of relatively slow playing methods to control the rhythm and change the speed in a small range. I think we might as well make some adjustments in the way Manchester City use Dzeko. However, that is another topic. I will not continue to discuss it here or start another article later. In a word, from the performance of the previous three games, 460 tactics did give full play to the characteristics of the original and newly introduced players of Liverpool, especially in the use of space and switching, and it also has good practical effect on the balance of attack and defense conversion. In addition, it needs to be pointed out that compared with the partial replacement tactics which only focused on the right side at the end of last season, the current 460 is undoubtedly more systematic and global. In other words, it can be cultivated as a set of basic tactics. 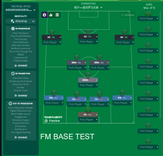