Not a Knap's tactic, but offensive, with possesion initative and good number of chances at space, against static defences and countering. Its also versatile, you can add pass into space or off-side instruction depending on your team.

I tried to make something offensively positional and relatively realistic. Tried a classic 4-3-3 but I think it wasnt much effective against weaker defensive sides. I lost many matches 0-1 against worst teams. There was also a gap between the midfield and the forwards. I was reluctant about assymetrical formations, but it works. The AMC come deep in the play making, so is basically something similar to Man City with De Bruyne.

In defence it works good against similar teams, but struggle in bad days. Anyway is a good tactic to be regular during all the season and not just in Anfield. I usually try to mark his playmakers and forwards (for example, Aguero, Rodri and Gundogan against City).

Its not miracolous, but can save your season. Sold half of the squad, with an average age of 23 with Swansea you see the results. And with Barcelona I won Liga and Champions. Its also true that those teams fit with this positional tactic, but I think this can be used with any team with a couple of changes.

Sorry for this spaniard college english, and leave your feedback

Edit: you can change roles deppending on your team players

I dont know how to caption this tactic 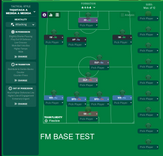