First time posting a tactic I have made, any resemblance to another is purely coincidental. Normally I don't have time to create my own and test properly as my laptop is poor but I have been able to use a gaming pc and have had the luxury of being able to actually make and test one.

As I don't normally have time I prefer a tactic where it is plug and play purely due to laptop processing speed, I am sure with work this could be even better and any advice would be sincerely appreciated.

I made this tactic mostly as I have not seen one shared with a carrilero role featuring perhaps I have missed any that do. It is simply to play reasonably decent possession football and to win games, the bigger team did well defensively but I am sure this is due to better players.

I started this tactic on a save with West Ham and tested going on Holiday leaving tactic and main selection of players to run, I got to March to check and was significantly overachieving with a 16th predicted West Ham.

I wondered if this could work elsewhere so did another test with a few teams Man Utd to see if would work with bigger team and to beat Liverpool, and two other smaller teams Blackburn Rovers and Parma in Italy. I was also using Eibar which started well but I changed the players in January and this then faltered.

All 3 achieved better than predicted. Man Utd won the league with only 1 loss in the league with the top scorer and least conceded. 81 isn't a massive number of goals in the league compared to many tactics but with only 21 conceded it is a decent result for Utd whom didn't win any cups but did reach the semis of Europe and Carabao cup, a freak loss to Luton in the 5th round of FA cup stopped that.

Blackburn overachieved placing 7th in the championship narrowly missing the playoffs in a very competitive division but 11 places higher than predicted 18th. Adam Armstrong took to this tactic and scored 40 goals in 51 games altogether. The defence wasn't so good but championship is always incredibly tight and better work with training or better suited players would likely help.

Parma was disappointing in that when there were losses they were big so negative GD but very much overachieved getting 7th instead of predicted 17th getting into Europe qualifying thanks to head to head records counting in Serie A over GD. Again I feel that better suited players would achieve more.

I am not going to profess that this is the master or greatest but it has actually overachieved with four out of five teams, if I hadn't changed the fifth could well have been all 5. I am posting more for advice, any which may improve this tactic/maximise its efficiency even with other teams would be highly appreciated. Any takers for testing and criticism welcome! 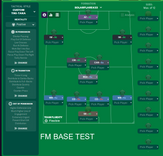