First of all, I would like to point out that the instructions in the tactic were not entirely my ideas, I just borrowed and mixed various elements from various creators hoping to make something work. I would like to acknowledge knap for Holy ghost fire team instructions and BJT for his team and player instructions on fm20 424 the launch route one tactic. And a final thank you to Daljit from Bust the Net for his amazing defensive set-piece routines from fm20. For this save I managed Fulham and plug and played my tactic for the whole season and was shocked to qualify for the champions league by finishing 4th. I delegated all responsibilities to staff apart from the opposition instructions, I didn't want it to interfere with the tactic for better or worse.

DISCLAIMER!!! Please forgive the 13-0 result win against Manchester United. (I cheated on that one, I swear it was for a good cause) I was babysitting my little nephew and he wanted to see some goals so I did the super fitness cheat on FMRTE. It was only for that match. However, putting it all into context, even if I get docked 6 points for that mischief, the tactic still overachieved because preseason media prediction was relegation and my board expectations were to fight bravely against relegation. I reckon it could work with a better team.

Thank you for your time. Stay Blessed. 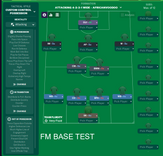