I always played with players on the wings in previous FM's and wanted to try out a more narrow, tiki-taka style tactic, which I thought would work perfectly for my Vélez side. It hasn't exactly been better than a 4231 wide with IFs and IWs (the other tactic I've been using during this save). This tactic does control possession and has amazing pass accuracy (always above 90%), but is vulnerable on the counter.

Attachment 525739 Now I'd like to know if it's just a shitty tactic I made or maybe someone could give me some tips on tweaks that could make it better.

Out Of Possession: Attachment 525742 I do make some tweaks depending on the team I play against. E.g. when I face a team who play a narrow formation I don't force the opposition inside.

So should I just stop trying to make tactics?

Ty to the testers who do some great work!

4231 Narrow Tiki-Taka Pass 'Till You Die 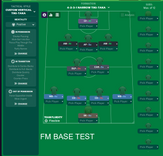