High scoring tactic, with 2 AM, still in development.

Tested and tried in Dulwich Hamlet save. Stayed with tactics through 5 seasons, got promoted to Championship. One semi final of FA cup. Tactics works best with players with better physical attributes, so pref that over tech and mental. Back line has to be with good acceleration. Can tweak the back line with playing with central defenders, not ball playing if there is a problem of finding a good ball player in the back in lower leagues. 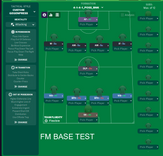