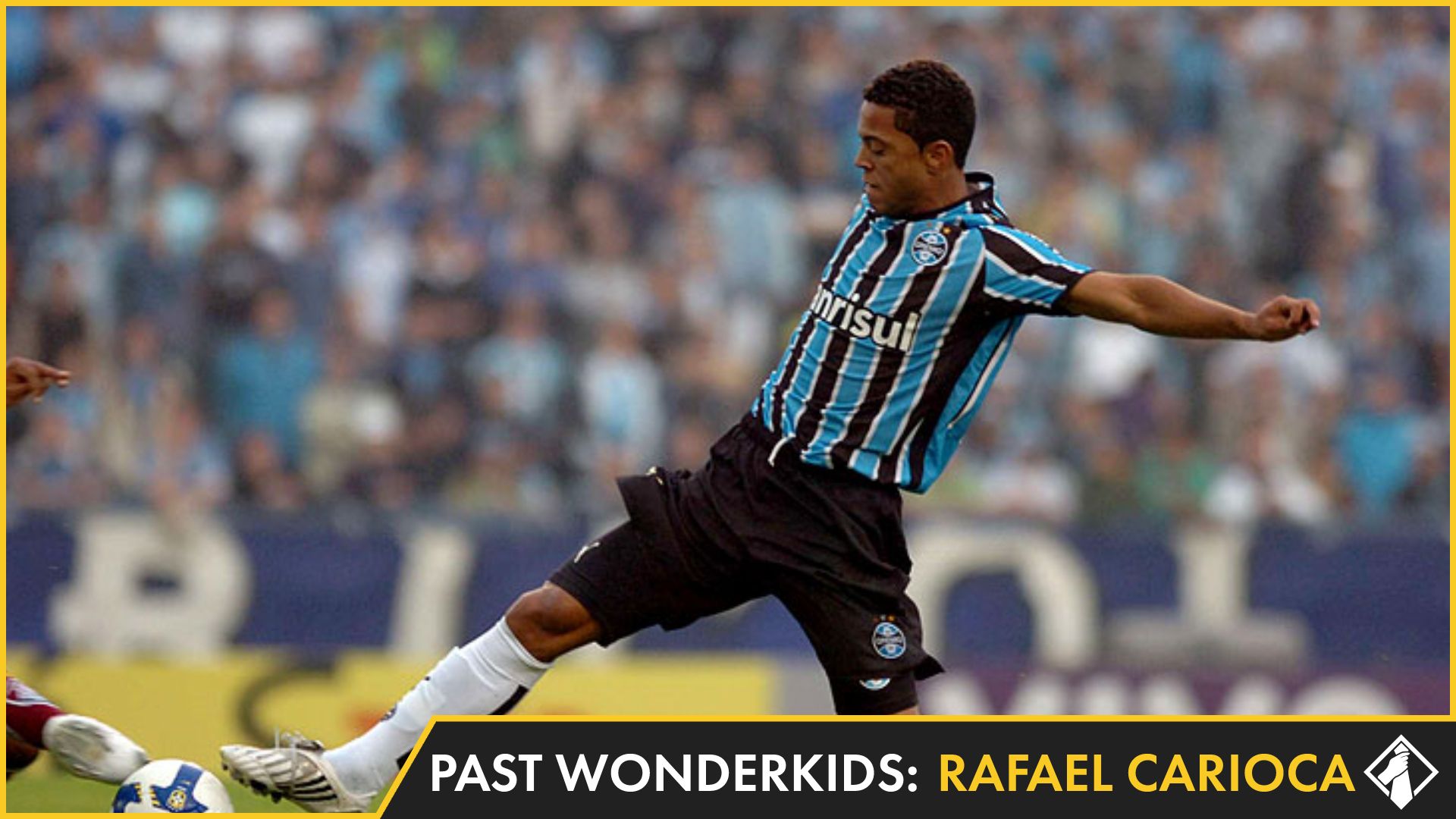 Whatever happened to Rafael Carioca?

We've all got our favourite wonderkids from editions of Football Manager gone by. Those players that we signed at the start of every save and built our whole side around. Today we're taking a look at a lesser known Brazilian, Rafael Carioca, a young central midfielder who had tonnes of potential in Football Manager 2009.

Rafael Carioca starts his career in his native Brazil at Grêmio, but with a release clause of a measly £3million, it's very easy (and worthwhile) to prize him away. A very talented defensive midfielder, Carioca had all the attributes to succeed right away, with a bit of positional naivety his only immediate weakness, but years and years to develop. He also showed a lot of potential as a more advanced midfield player, possessing many of the attributes needed to be an effective playmaker, although his flair is a shortcoming in his game.

Today, Rafael Carioca has developed into the midfield playmaker he showed the potential to be back in 2009. The word developed may be a bit of a mistruth here though if taken literally, it's only his mental attributes that have seen any significant growth, such was his ability at a young age. His main technical strength as a teenage ball winner, his tackling, is now one of his bigger weaknesses and has essentially been exchanged for a higher level of flair. Other than that, his technicals remain on a similar level and his physicals have decreased slightly, which at 30 is understandable.

Rafael Carioca joined the Grêmio youth setup in 2006 and was briefly promoted to the senior side in March 2008 under manager Vágner Mancini, who complained about Carioca's attitude and sent him back to youth football. When Celso Roth replaced Mancini as manager Carioca was promoted once again, and made his league debut in May, going on to become a first-choice midfielder and play 34 times.

This one season of football was enough to convince Spartak Moscow to sign Carioca, and he joined on a five-year deal. He played 23 times for the Russian side in 2009, but was then loaned back to Brazil in 2010, playing over 50 games for Vasco da Gama. Upon returning to Russia he established himself as a regular for three more years, before joining Atlético Mineiro in 2014 - originally on loan, and then on a permanent deal.

His spell at Mineiro was a relatively successful one, winning the Copa da Brasil (the equivalent of the English FA Cup) in his first season, and also the Campeonato Mineiro twice, as well as qualifying for the Copa Libertadores. His time at Mineiro was impressive enough to earn him his first call ups to the senior Brazil squad, although he didn't get onto the pitch in the four matches he was selected for.

In 2017 Carioca joined Mexican side Tigres UANL and has so far played 155 games for the club, more than he has for any other club in his career. In his time in Mexico, he's helped Tigres to win the Liga MX Apertura and Clausura (Opening and Closing Stage) once each, in 2017 and 2019; the Campeón de Campeones and the subsequent Campeones Cup, both in 2018, and most recently (and impressively) the CONCACAF Champions League in 2020. This secured them a place in the World Club Cup, where they reached the final and only narrowly lost to a near full strength Bayern Munich.

I'm not really sure that anything did go wrong for Rafael Carioca. Sure, he didn't reach the massive highs that were predicted for him back in 2009, but he's played in a few of the largest club competitions in the world, established himself as a key player at clubs in Brazil, Russia and Mexico, and earned enough recognition to make the Brazil squad in a stacked midfield, even if he didn't get to play. He's had a solid career rather than a world-class one, but he's achieved more than many in the game, and I think it's just a case that the hype around him at a young age was just a touch too high.

Rafael Carioca is one of my favourite wonderkids of all time, I must have signed him at least 10 times across different saves! Was he one of yours? Or is this the first time you've heard his name? Let me know over on Twitter @adam_otbfm, and also feel free to drop some suggestions of any players you'd like to see covered in the series!