My FM Journal is now available, check it out
FM22FM22 Wonderkids

These Brazilian superstars are considered some of South America's best young talents today!

Few nations have a richer sporting heritage than Brazil! Since Pele, the Brazilian legend symbolized the beautiful game, the country has produced some of the game's most technically gifted players.

Because it has produced some of the world's top young players, the Brazilian league has become a hotbed for wonderkids and raw talent. Our Football Manager 2022 Brazilian Wonderkids List will help you identify the best young Brazilian players to recruit right now.

We've produced a list of the finest Brazilian wonderkids for FM 2022. 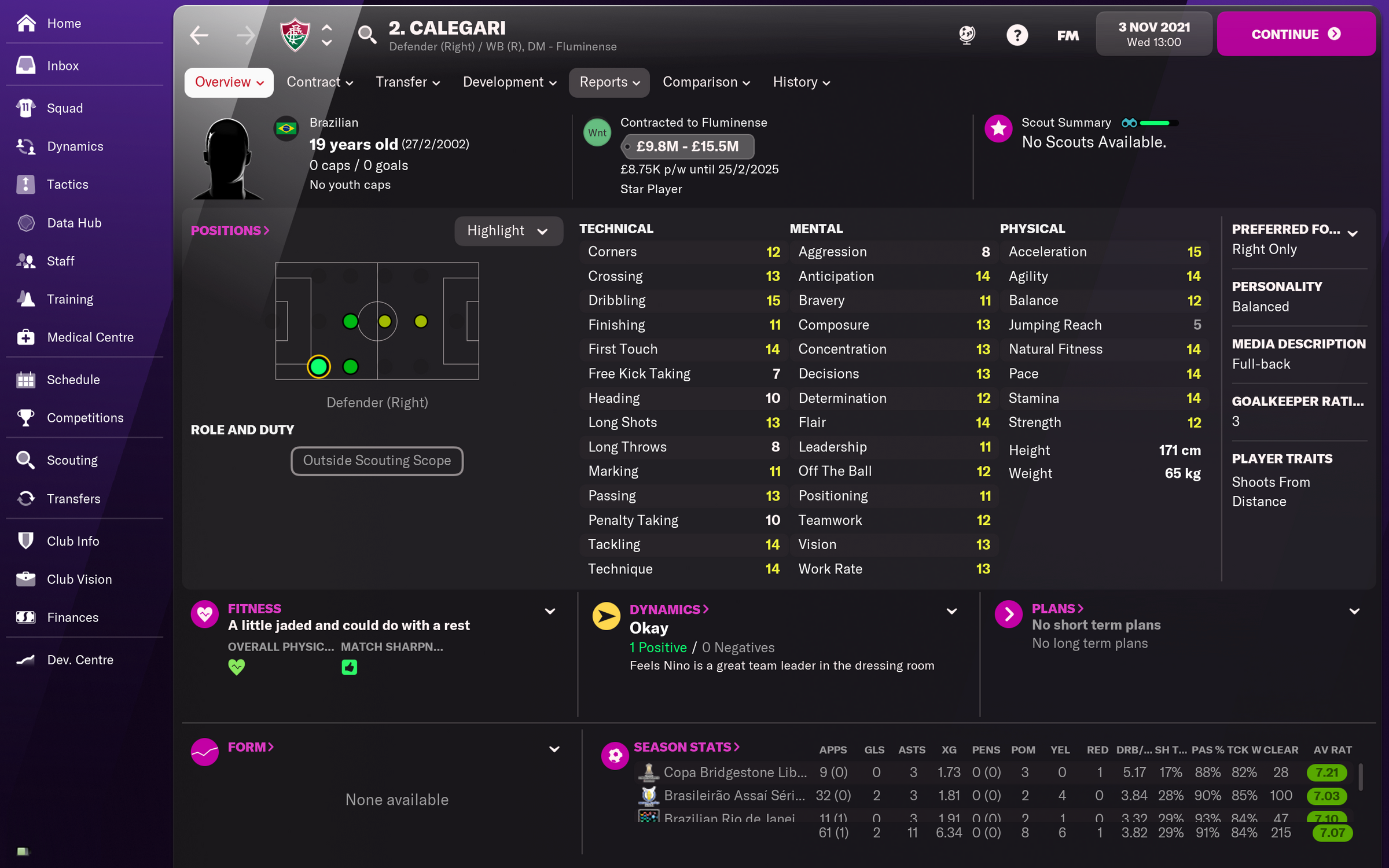 Fluminense's Lucas Calegari is one of the most comparable Brazilian wingbacks to Daniel Alves. The 19-year-old attacking wingback debuted in August 2020. He has played 40 times for Fluminense since.

If the ball is lost high up the field, the Brazilian right wingback in Football Manager 2022 has the tenacity to attack space and quickly return to defensive positions. Calegari's ability to cover a lot of territories makes him a strong asset in a 4-3-3 or 3-4-3 formation.

In one-on-one situations, he excels at getting beyond his man to send crosses from the byline or diagonal through balls from wide.

His ability to create overlapping attacking runs and score goals from beyond the area may help you earn points and ultimately titles. Calegari is expected to fetch about €30-40 million, with a weekly wage of €13-20K. You could get a better deal if you wait till the Brazilian Serie A is over. 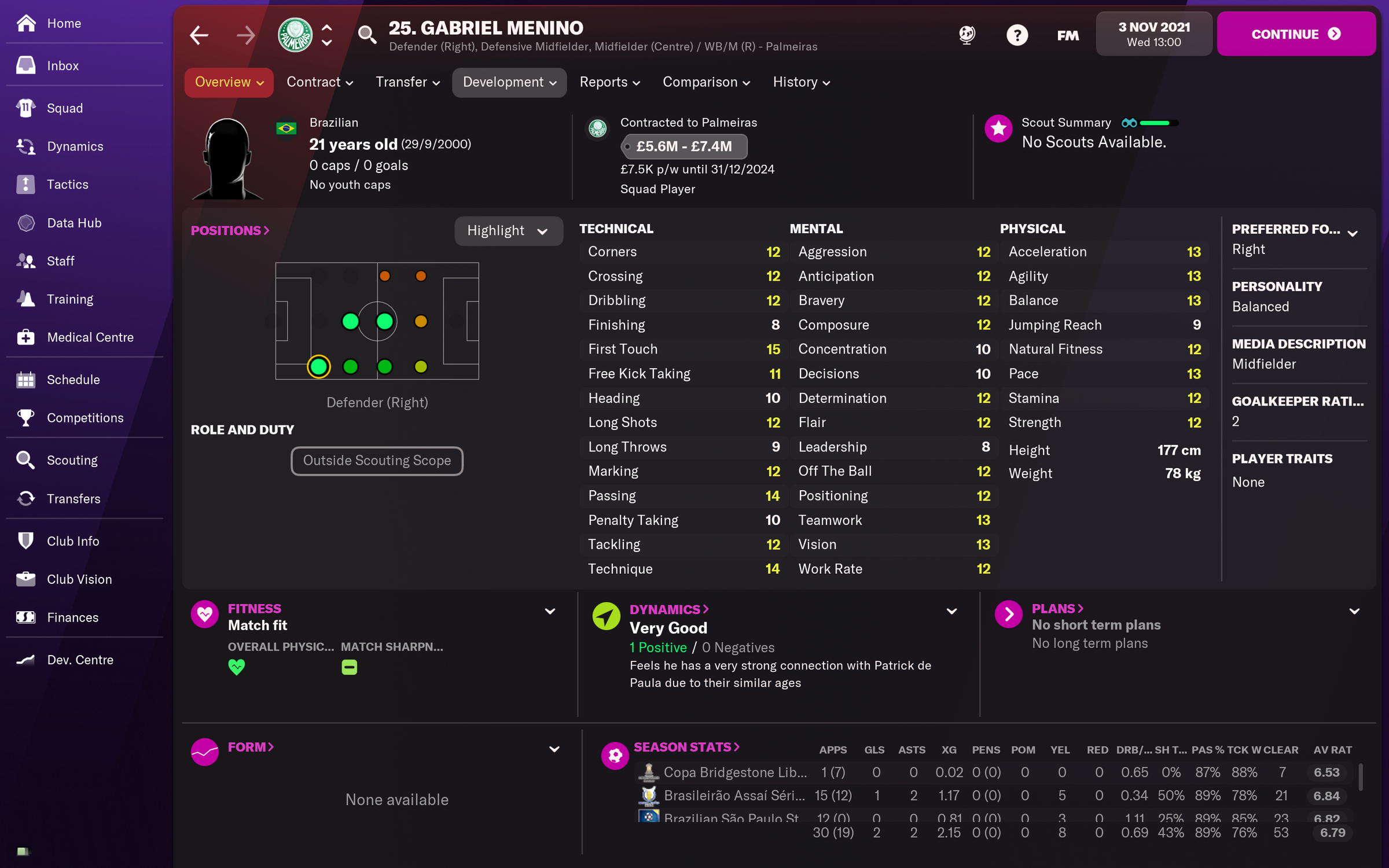 Gabriel Menino is the guy you should recruit if you need to add depth to your squad in a variety of positions. At defensive or supporting duty, he has the positional versatility to play as a deep-lying playmaker, defensive midfielder, wingback, or complete wingback.

He's a highly well-rounded player with exceptional ball-handling skills. His 15 first touch, 14 passing, 14 vision, 14 and 14 skill might make him the ideal tiki-taka deployment. Menino may not be the greatest player to approach the final third by being in or near the penalty box. You should instead reap the benefits of his crossing.

The resemblance to Daniel Alves is startling. Gabriel Menino is a versatile player who can play in a variety of roles, including as a midfield player from the back.

The dynamic Brazilian wingback may be a good squad member for a transfer fee of between €20 and €30 million. His wage bills will almost certainly be greater. Expect a weekly wage requirement of roughly $30-50K. 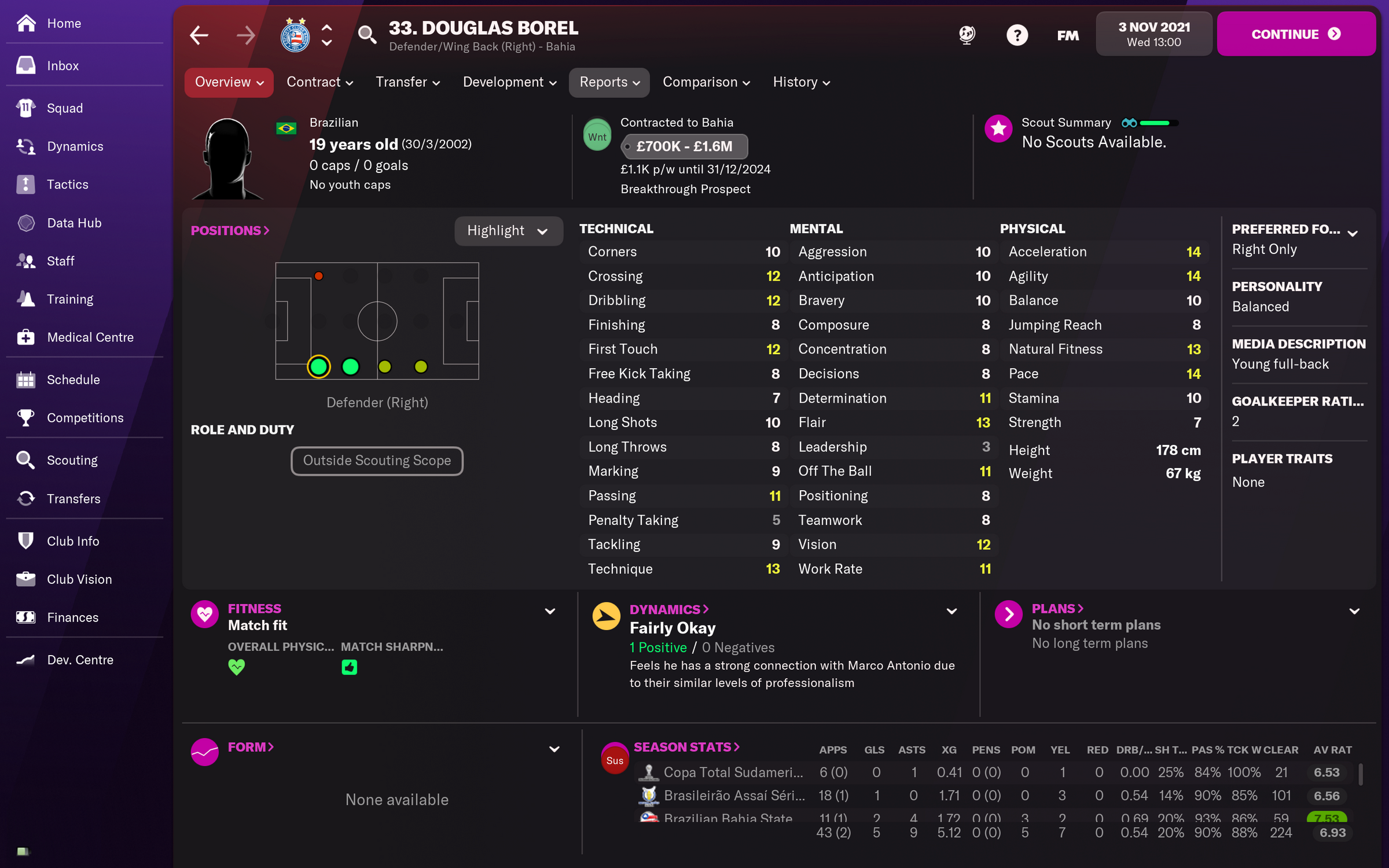 We have an affordable player for you if any of the above Brazilian players appear too expensive. To any team in France, Spain, or Portugal seeking for a player to develop in the future, Douglas Borel is a bright youth with high ratings.

To compensate for his lack of mental abilities, the teenager has good acceleration and speed (14 and 13). He has good vision, 14 technique, 13 Natural fitness, and a 12 first touch, making him a cheap Daniel Alves substitute. Determination, cooperation, and tackling are still work in progress.

His dribbling, agility, and flair scores are on the level with the previous four suggestions. As a consequence, he may be an inverted winger or inside forward who can outwit his opponent.

The 19-year-old, who now represents EC Bahia, is a versatile player prone to injuries. FM22 is accessible for €1-2 million and requires a € 2-5 thousand weekly income. 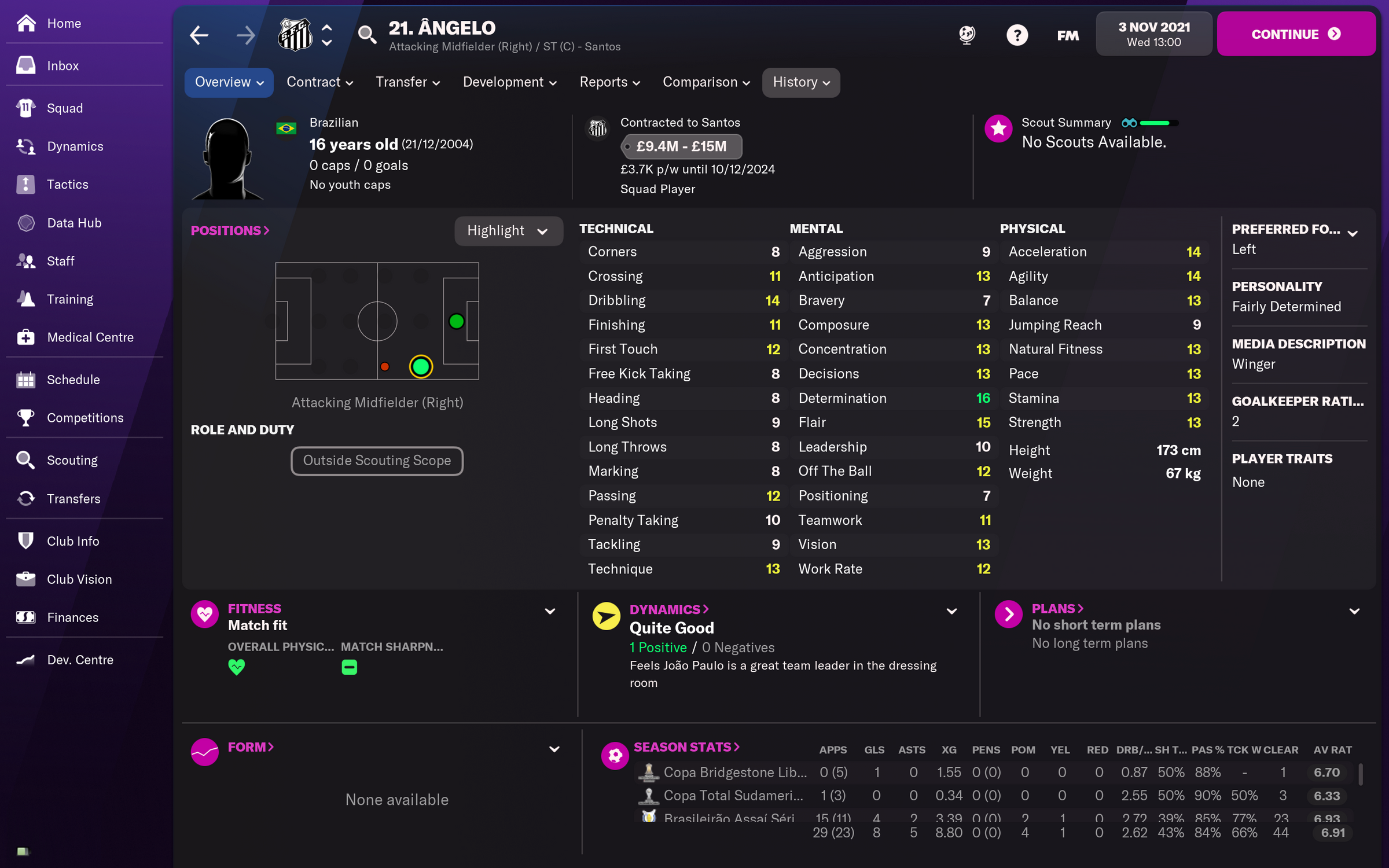 Angelo Gabriel is one of the top Brazilian wonderkids in FM 2022. In October 2020, he made his Serie A debut against Fluminense, and since then, he's been linked with every major European club. At 15 years and 308 days, he became the game's youngest player.

Ngelo can play as an Inverted Winger in a 4-2-3-1 or an Inside Forward in a 4-3-3 in Football Manager 2022. The left-footed winger must attack from the flank and cause chaos in the opponent's defensive framework. At 16, he possessed exceptional off-the-ball movement, agility, and dribbling.

He's great in transition and on both sides of the ball. When he gets the ball, he can create chances and make important key passes. He finished well and calmly in the penalty area to score.

Overall, he has great movements for his age, and I'm sure adding Angelo Gabriel will help you succeed in FM22! 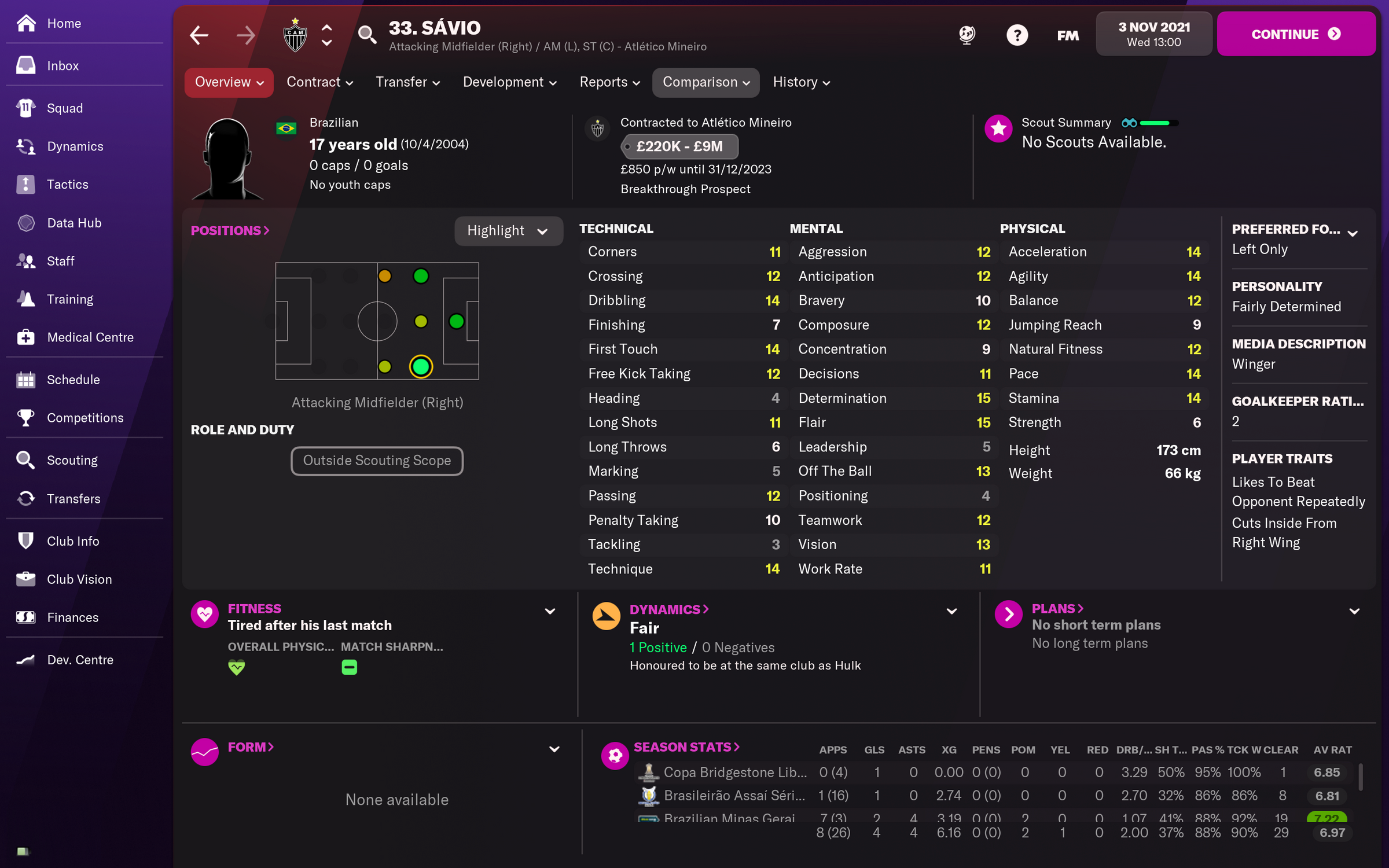 Sávio is the next likely future Neymar in Football Manager 2022. He's another wonderkid worth signing at any price.

Sávio Moreira de Oliveira, popularly known as Sávio, is a forward for Atlético Mineiro. Sávio debuted in September 2020, making him the Brasileiro Serie A's youngest player. 12 Teamwork, 13 Aggression, 13 Vision, 13 Dribbling, and 12 Free Kick Taking were all awarded to the inverted winger. He already has the pace needed to compete in football.

Sàvio's aggressiveness is terrific to shut down opponents and be part of a squad that executes with more pressing intensity. Sávio might be better suited to a 4-4-2 or 4-3-3 with winger assistance. I think he'll be great at providing space for offensive wingback runs into the box and working the half-spaces diagonally.