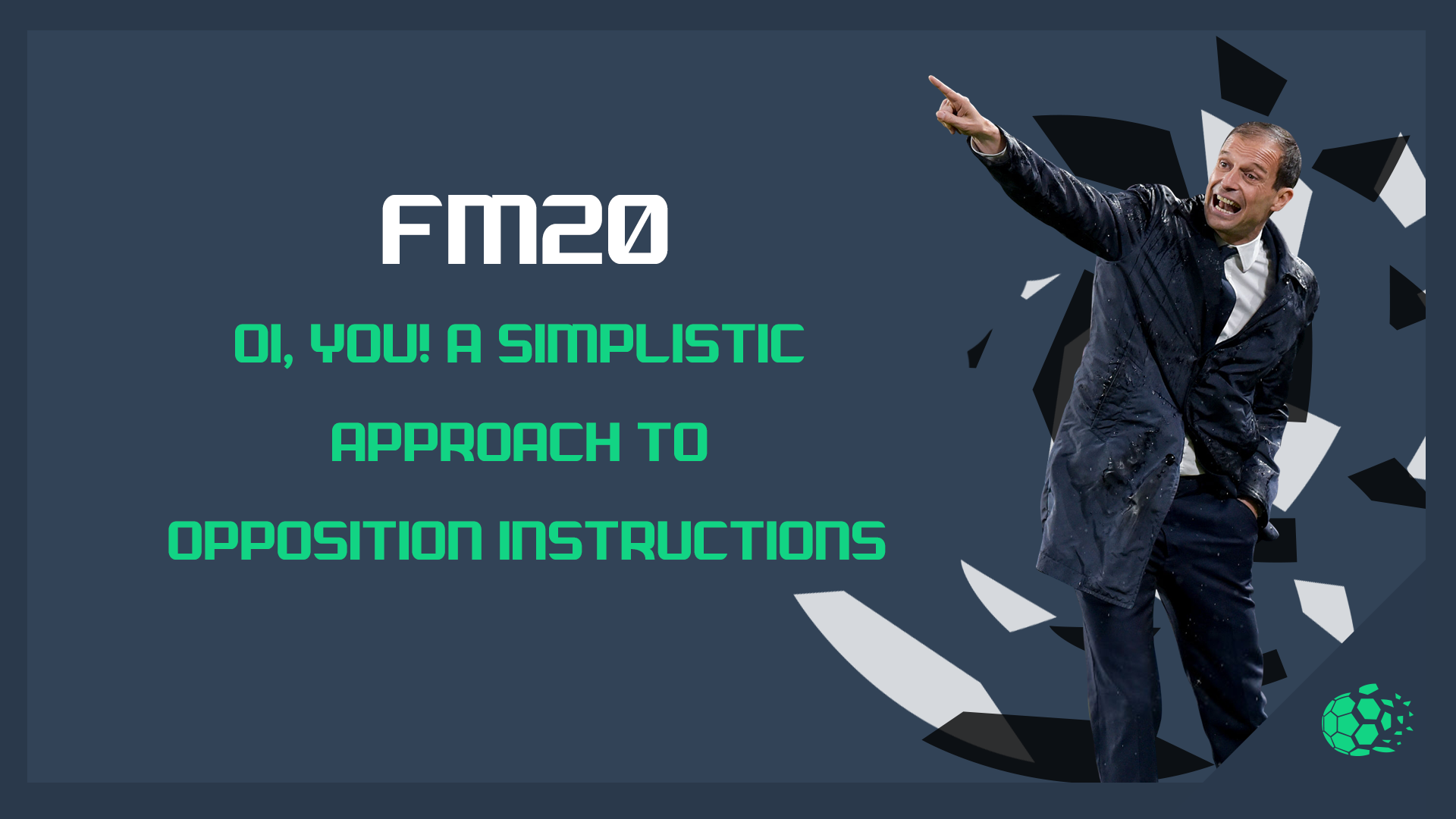 FM20 OI, You! A Simplistic Approach To Opposition Instructions

The premise of this guide is to provide you, a simplistic approach on how to use Opposition Instructions (OIs) effectively.

I'm going to be going against a future Chelsea (2029) squad who are currently still pretty strong.
(Below is from the Scout Report, knowing the roles helps a little too, however, this may not marry up to the line-up you're against so always worth checking the OIs within the match).

Tight Marking
Used to prevent the opposing player(s) from getting the ball, or restricting their movement on the ball.

For my example I will be marking Arthur, he's playing as a Deep Lying Playmaker for Chelsea, and has some amazing creativity. If I can stop him receiving the ball and being able to ping it across to the others, seems like a good start. Plus, he's slow, so a very good example.

Pressing Intensity
When not in possession, players hunt the ball to re-gain possession almost immediately after losing it.

As you'd expect from Chelsea, they don't have many players that are very indecisive, however, I have found a weak link. 31-year-old, Theo Hernandez!

I am hoping my AMR will put him under enough pressure that he never really gets to have a free run.

Tackling
To dispossess the ball from the opposition.

Here's a prime example of a good player to go hard on...

In this case, I am going to take it easier on Phil Foden, going hard on him isn't really going to gain my anything due to his attributes.

Show onto Foot
This will require you looking at the preferred foot of each player and their positions:

There's also another way to decide this taking from an theorem by wwfan in 2009.

Sadly, this Chelsea team doesn't have any players that are "only-footed" players, and even though the scout report states the AML/AMRs are Inside Forwards, the right footed-player is in the AMR (Pulisic) and the left-footed player is in the AML position. Their striker is also very well rounded. That won't stop me. I'll show their DL/DR onto their weaker foots.

Specifically Theo, again... I want him to have a bad game and not to putin crosses from outwide with his left foot, plus I intend to exploit him.

Finished Product
So using all of the above, this is how I intend to use the OIs against Chelsea:
(You'll notice the line-up doesn't quite match that of the scout report, it's why it's always important to check the OIs in the actual match itself)

Both the LB and RB of Chelsea had a nightmare of a game! Arthur/Roca was to, until they got the assists to Dubos which was my mistake. I didn't adapt well enough and they got two balls over the top for Dubos to put away easily.

Remember, adapt during the match! Teams will make subs, change mentality and shape! You need to adapt to them on the fly. Don't make the mistake I made!

Other Guides:
Finding Your Voice! A Simplistic Approach To Shouting