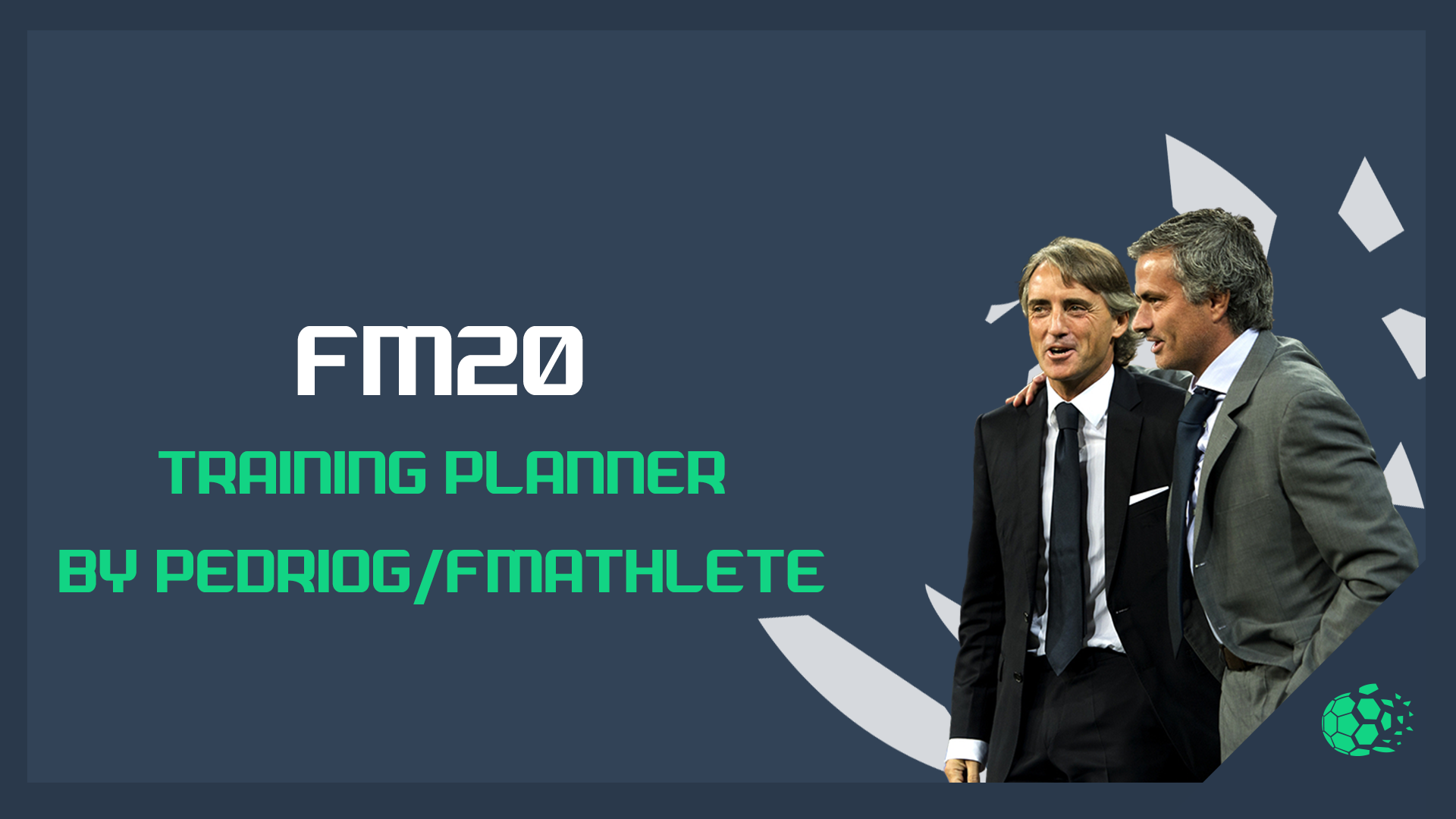 Training has been overhauled on Football Manager meaning players now have an in-depth training schedule at their exposure. Yet, this overhaul for some has been overwhelming. The level of detail that players can now go into setting up schedules and making training plans to really push your managerial style is fantastic. For those that have been overwhelmed with the detail, fear not, FM Athlete developed this fantastic training planner for Football Manager which was updated for FM20 by Pedroig

FM Athlete's Disclaimer
This workbook was prepared independently of SI and FM. It is entirely my own interpretation of how I understand the training modules to work and i could very well be completely wrong! I am continuing to test its success and will make adjustments to the math as I learn more about the true impact of training sessions on player attributes. Please feel free to use the data as you see fit, and share your comments or suggestions for improvements with the community.

Please note that the content below has been taken directly from FM Athlete's Blog regarding the training planner​
Creating the Tool
To begin with, I copied over the details for each training module and session into a spreadsheet, with the list of attributes and other impacts down one side, and across the top, I included the session name, the unit being trained and the percentage of intensity that the unit is experiencing for the session.

Where an attribute or impact is mentioned I put “Yes”, otherwise it was left blank and for the Health impacts such as condition, fatigue, happiness etc. I used the same phrasing as the game i.e. increased, reduced etc.

With the data now in a numerical state, I created three more sheets, two for where we could do some of the maths and the other as the “front” sheet where the user enters the sessions they want to run each day.

On the first maths sheet, I’ve allocated a multiplier that takes into account how many attributes/impacts are being worked on in the session. In other words, the fewer attributes in the session, the higher the effect on them. This led to some sessions having an unrealistic weighting where only 1 or 2 attributes were being worked on and so for these, I added a handicap so that the data on the front sheet is easier to compare. I suspect this handicap will need adjusting later on but we won’t know until more testing has taken place.

The second maths sheet takes the result of the calculations for each attribute/impact above and multiplies it by the level of intensity that that training unit experienced in the session. So, for example, in the “Attacking Wings” session, our Attacker unit operates at a 60% intensity level, while our Goalkeeper and Defender units operate at 20%. Therefore, the Attackers attributes are improved more than the Goalkeepers or Defenders.

User Interface
On the front sheet is a schedule that mimics the one in the game. You simply click on the drop-down arrow and select your session from the list.


Training Schedule
Below the schedule is a table that totals up the effects on each attribute or impact for the different units. The more sessions you add to the schedule, the greater the effect. This gives you a quick visual of which attributes are being worked on most, and which ones are being neglected, allowing you to make the necessary adjustments to get it just right.

One important point to make when reading the data is that the numbers are all interdependent, and are not showing what the actual increase of the attribute will be. I.e. where Aerial Reach has a 1.4 for Goalkeepers, this is not saying that this attribute will increase by 1.4, but rather that there is a relative effect to the value of 1.4, compared to say an effect on First Touch of only 0.4.

The example table above gives us a good snapshot of the effects this schedule will have on the players. Using the averages at the bottom, I can instantly see that it doesn’t include much affect on Physical attributes, and the Goalkeepers won’t see much effect either. In terms of the other impacts, there’s not much going on for Tactical Familiarity, but plenty of Team Cohesion which is good.

From here, I can adjust the schedule to change which attributes are being worked on. For example, I might throw an Endurance session in to bump up the physical attribute training or remove Team Bonding to reduce the effects on Teamwork and Team Cohesion.

The Gaps
In addition to what is in the tool, I also want to point out its limitations.

For one thing, there will be “hidden” effects of training that aren’t explicitly called out in the session descriptions and therefore, have not been factored into the tool. An obvious example is that player fitness will increase with training and match practice. I am yet to assign a value for how much attributes like Natural Fitness or Stamina might be affected by a player simply going to training, regardless of what the session entails.

I am still working on the effects of Set Pieces training as well as playing in a competitive Match. At the moment, choosing Match will have the same effect as Match Practice, although my feeling here is that in a real match, the effort and intensity are higher so I may increase these values in the future. As for Set Pieces, this won't have any effect at the moment but I’m working on this part for the next version.

Finally, there’s also no correlation to Individual Training and how this will impact on the player's development in the long run either.

Updated for FM20 by Pedriog

Tweaks:
User Input page:
You can now enter your League Reputation (0-5 stars) for a baseline training regime guide of intensity.
You can now enter your squad's average attributes for Natural Fitness, Stamina, Work Rate, and Determination for a custom training regime guideline. (These attributes have been selected because they seem most applicable to the visible traits to how hard you can push your squad in training, disregards personalities)
You can select up to 10 CORE DNA attributes. These will be highlighted on the Tactical Planner page for your convenience.

Tactical Planner page:
Added a Type for each DAY's training regime. This will quickly show the training intensity level (should be comparable to the in-game intensity) as well as the Tactical Periodization training type.
Added a scale for intensity colours and a definition section for the Tactical Periodization terminology. Along with brief suggested usage.
As noted above, the Core DNA attributes you have selected will be highlighted in the table.